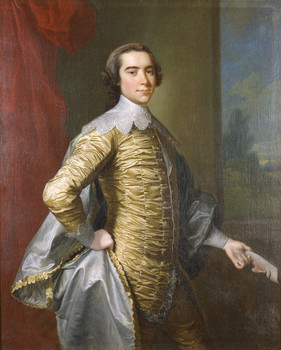 Robert Carter, also known as Robert Carter III and Councilor Carter, was a member of Virginia’s Council of State (1758–1776) who, after a religious conversion, emancipated more than five hundred of his enslaved African Americans. Heir to a fortune in land and slaves built by his grandfather, Robert “King” Carter, Carter studied law in London before returning to Virginia in 1751. His contemporaries remarked on his lack of learning and social grace, and he twice ran unsuccessfully for the House of Burgesses, receiving only a handful of votes each time. Through the influence of his wife’s uncle, Carter was appointed to the Council. In 1763, he served on the Virginia Committee of Correspondence, and in 1766 drafted the Council’s response to the Stamp Act. In 1777, he converted to evangelical Christianity, aligning himself with the Baptists. In 1788, he converted again, this time to the teachings of the Swedish mystic Emanuel Swedenborg. On August 1, 1791, he took the legal steps to gradually emancipate more than 500 of his slaves, the largest individual emancipation before 1860. After the death of his wife, Carter moved to Baltimore, Maryland, where he died in 1804.

Carter was the son of Robert Carter and Priscilla Churchhill Carter and was born on February 9, 1728, probably at Corotoman, the Lancaster County plantation of his paternal grandfather. Both of his grandfathers, the land baron Robert “King” Carter and William Churchhill, of Middlesex County, served on the governor’s Council. He has often been referred to as Councillor Robert Carter to distinguish him from his father, grandfather, and other near relatives of the same name, among whom only his grandfather served on the Council. Until sometime after his father’s death in May 1732 he lived at the family plantation in Westmoreland County. Because Carter’s father died before his grandfather, it was necessary for his guardians to obtain a special act of assembly to enable him to inherit the portion of his grandfather’s estate intended for his father. The law of October 1734 entitled him to receive more than 65,000 acres of land and several hundred slaves when he reached age twenty-one.

Following his mother’s marriage to John Lewis sometime during the winter of 1734–1735, Carter lived at his stepfather’s Warner Hall plantation in Gloucester County until about 1737, when he entered the grammar school of the College of William and Mary. Little else is known about his youth until February 1749, when he received his patrimony and sailed for London. On December 1, 1749, Carter was admitted to the Inner Temple to study law, but he returned to Virginia in June 1751 without being admitted to the bar. An elegant portrait by Thomas Hudson dating from this period and depicting a poised young courtier attired for a costume ball does not reflect what his contemporaries saw when he arrived in Williamsburg. Several of them commented unfavorably on his lack of learning and social grace.

Carter moved into Nomony Hall (as he nearly always wrote its name, although it is usually spelled “Nomini” or “Nominy”), the Westmoreland County mansion he had inherited from his father. He learned the business of a tobacco planter and until the 1770s thereafter exported to England as many as a hundred hogsheads each year. On April 2, 1754, Carter married Frances Tasker, of Annapolis, daughter of Benjamin Tasker, longtime president of the Council of Maryland. Of their thirteen daughters and four sons, eight daughters and all four sons reached adulthood. In April 1752 Carter was appointed to the Westmoreland County Court. That same year and again in 1754 he ran for vacant seats in the House of Burgesses, but he received the smallest number of votes each time. Through the influence of his wife’s uncle, Thomas Bladen, who had served in Parliament, Carter received an appointment from the king on April 7, 1758, to serve on the governor’s Council. He took his seat on October 18 of that year.

During his first three years on the Council, Carter attended only about a third of the recorded meetings. In 1761 he purchased a large frame house near the Governor’s Palace on the green in Williamsburg and moved there with his family. For the next fourteen years he regularly participated in Council proceedings. Carter was frequently a member of committees drafting responses to the governor’s speeches to the assembly, considering amendments to proposed legislation, or examining accounts of the treasurer or the journals of the Council. He accompanied Lieutenant Governor Francis Fauquier to New York in 1761 to discuss Indian affairs and to Georgia two years later to discuss relations with the southern Indian tribes. In 1763 Carter served on the Virginia Committee of Correspondence, and in 1766 he drafted the Council’s response to the king following the repeal of the Stamp Act. Evidently trusted by both sides during the tense years preceding the American Revolution (1775–1783), Carter joined Richard Corbin in representing the Council early in June 1775 when it officially expressed to the royal governor its concern about rumors that British marines were to be stationed in Williamsburg. As a member of the Council, Carter was also a judge of the General Court, but because of the loss of most of the court’s records little is known of his service, except that he was in the minority in 1764 when he voted to uphold John Camm’s complaint against the Two Penny Act.

Carter’s residence in Williamsburg brought him into frequent contact with the colony’s intellectual, political, and social leaders and smoothed off some of his rough edges. He developed close friendships with such educated men as Fauquier and his successor, Governor Norborne Berkeley, baron de Botetourt, as well as William Small, who taught at the College of William and Mary, and George Wythe. Carter shared with Fauquier and Wythe’s law student, Thomas Jefferson, a love for instrumental music, and Fauquier named Carter one of his executors in Virginia. Carter did not form the same bond with Botetourt’s successor, John Murray, fourth earl of Dunmore, and in 1772, not long after Dunmore took office, he moved his family back to Nomony Hall.

Carter still traveled to Williamsburg on Council business but focused more on the management of his estate. He diversified crops and added manufactures such as milling, spinning, and weaving. About 1770 he purchased a one-fifth stake in a large Baltimore ironworks that his father-in-law had helped found. In 1773 and 1774 the tutor Philip Vickers Fithian recorded a fascinating intimate picture of the Carter household in the diary he kept at the plantation, and he copied into his journal a catalog of Carter’s extensive library.

The Revolution concluded Carter’s service on the Council, which ceased to exist in July 1776. The following summer he took an oath of loyalty to the new Commonwealth of Virginia but held no public office. British ships raided his plantations near the Potomac River, and he was plagued in the postwar period by heavy plantation expenses and a shortage of cash in a stymied economy. Carter campaigned for a seat in the Virginia Convention of 1788 as a supporter of the proposed constitution of the United States but was not elected.

A member of the Church of England from childhood, Carter became a vestryman of Cople Parish in Westmoreland County in November 1752. In June 1777 he announced his conversion to evangelical Christianity and soon allied himself with the Baptists. The next year Carter was baptized by immersion and joined Morattico Baptist Church. He regularly attended prayer meetings, provided financial support for numerous evangelical preachers, and became one of the denomination’s most influential adherents in Virginia.

Carter’s household was then shrinking. His daughters were marrying and leaving home, his eldest son died in 1779, and his wife died on October 31, 1787, and was buried in the garden at Nomony Hall. He sent his two younger sons to school in Rhode Island, where they could be educated free from the taint of slavery. Although Carter inherited and owned hundreds of slaves, his growing opposition to the institution echoed the antislavery sentiments of many Baptists in the 1780s. On August 1, 1791, he executed a deed of emancipation for more than 500 of his enslaved African Americans. It was probably the largest emancipation by an individual person in the United States before 1860. Because of Virginia’s restrictive laws, the emancipation was gradual, and the young slaves received their freedom when they reached adulthood. Carter spent his remaining years working out the details and schedule, an effort that embroiled his agents and executors well into the nineteenth century.

In January 1788 Carter discovered and quickly embraced the theology of the Swedish mystic Emanuel Swedenborg and switched his allegiance from the Baptists to the Church of the New Jerusalem. Carter caused several of Swedenborg’s writings to be reprinted in America and wrote the preface for the first American edition of The Liturgy of the New Church, published in Baltimore in 1792. Carter moved with two of his younger daughters to Baltimore in 1793 in order to be closer to a center of Swedenborgian worship, and three years later he divided his Virginia estate among his surviving children and grandchildren, who drew lots for their portions. He spent his last years managing his investments. Carter died suddenly in Baltimore on March 11, 1804, and was buried in the garden at Nomony Hall in Westmoreland County.

Please consider making a donation to help support our work!

Stay up to date

Sites Once Owned by the Carter Family

Slavery and The Middle Passage